First of all to all Sharkattacks.com viewers, some of the magnificent photos of the Great White shark and the Blue Shark that you see on the site were taken and allowed to be shown on this site thanks to Amos Nachoum. For those who do not recognize the name, Amos is probably by far one of the most famous photographers of Sharks and Whales. Here is a small intro about Amos Nachoum, his work, and links to his great web site. 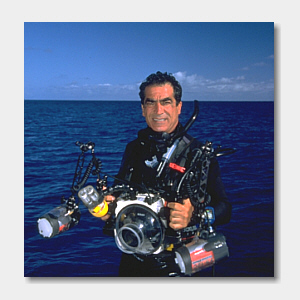 Please visit Amos Site and take a look at his amazing work.

Amos Nachoum an Israeli citizen and a veteran of his nation Special Forces.
Amos venture into the world oceans in search for ultimate photographic experiences.

Amos first commercial venture in the USA was operating and directing a most
successful dive travel company "La Mer Diving Seafari" from '80 - '90,
offering an exclusive on the cutting edge dive travel expeditions on board
live aboard vessel from the Red Sea through the Maldives, PNG,Madagascar and
more. 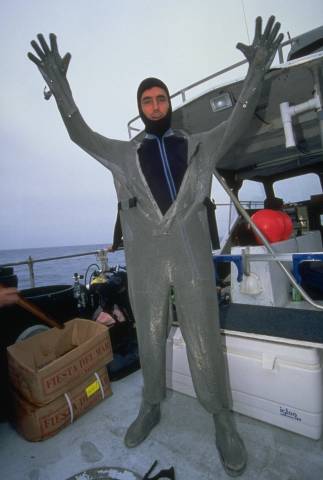 From 1992 onward Amos effort have been focused on professional photography
for commercial and editorial. Some of his commercial accounts are the
tourist office of Israel, Saba Island,  Australia, New Zealand and Brazil.
Apple. IBM. Microsoft. Armani. The Discovery Channel. Disney and Colombia
Pictures.

Today, Amos is a full time wildlife  photojournalist and a director of a
cutting edge adventure  travel program "Big Animals.com" Amos lead intimate
group of 2 - 6 people on photographic adventure into the wilderness to
interact in person and peacefully with "Big  Animals" such as Great White
Sharks, Killer Whale, Polar Bears, Bill fish, Sperm & Humpback Whales, Beluga & Narwhales, Dolphins and other species of these families in the aquatic wilderness.

The ultimate goal of the adventure program and Amos photography skills is
to capture the Imagination and provide information to all,  young and old
in order to gain their respect to protect all Predators and Mammals above
and below sea level.

He recently finished working with  National Geographic
TV on a program in Norway about Orcas. He is working on producing a coffee
table book, a line of fine art lithographs, CD ROM, and Television .programs
hoping to raise awareness of our precious resources, the ocean.

Amos photos and essays have been widely published in many magazines, over
500. In North  America, Europe and Japan. Including National Geographic
magazine and TV, Ocean Realm,  Island, Outside, Sport Diver, Rodale†s Scuba
Diving, Time, Life, The New York Times, Conde Nast Traveler. Forbes,
Fortune, Le Figaro, Terra Sauvage, Airone and Sinra. In addition, his work
has been published   in the books The Living Ocean, Oceans and The World
Nature. His work has been profiled in   television appearances on the
Explorer-National Geographic ( Sept. '97), Today Show and Good   Morning
America, as well as in People, Esquire and Money magazines. 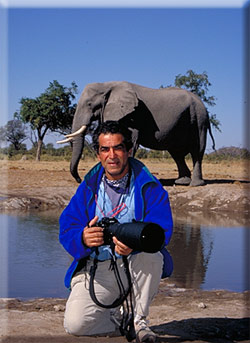